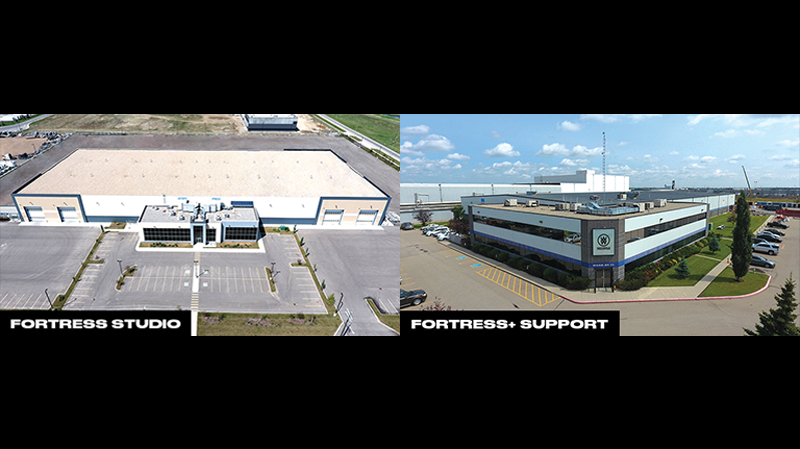 “We’ve been actively supporting the Alberta film and television production industry since our Calgary office opened in 1990, and we reiterated that support in 2016 through our partnership with the Calgary Film Centre,” says Garin Josey, Executive Vice President/Chief Operating Officer. “There continues to be incredible opportunity for expansion in Calgary. We see now as the perfect time to open up our 10th Canadian studio property in an effort to bring even more local and international productions to this booming production hub.”

Fortress Studio offers clients 97,500 square feet of filmable space and a clear height of 36 feet within the 109,100 square foot facility. Fortress+ Support acts as a supplementary property with 69,999 square feet of support space and 19,751 square feet of private offices, boardrooms, and additional workspaces. Both properties are a short driving distance away from each other, WFW, the Calgary Film Centre, Sunbelt Rentals, and a large outdoor green space.

“The combined power of WFW and Sunbelt Rentals will ensure Calgary production professionals have everything they need to do what they do best,” says Chris Van Mook, Vice President, Sunbelt Rentals Canada. “Our comprehensive equipment fleet includes elevated work platforms, forklifts, and HVAC options to perfectly complement this upcoming studio and the dedicated services already offered by WFW.”

“Alberta is on track for a record year in the film industry,” says The Honourable Doug Schweitzer, Alberta’s Minister of Jobs, Economy and Innovation. “WFW has been a major player in our province for a long time, and this new development of studio space will be critical to expanding the industry further. It will help create jobs, diversify our economy and bring in millions of investments across Alberta.”

“For decades, we’ve been discussing the potential of the film industry here in Calgary, but over the past few years, our momentum has really started to grow,” says His Worship Naheed Nenshi, Mayor of Calgary. “WFW was a partner in establishing the Calgary Film Centre, and this latest investment is a major endorsement of our potential as a hub for film, television, and other content production. This will lead to new potential for Calgary, but even more importantly, will create training and employment opportunities for current and prospective film industry professionals.”

“We are excited to have WFW increase their offerings in Alberta with much needed infrastructure to service the Film & Television community in a long term, sustainable manner,” says Luke Azevedo, Commissioner Film, Television & Creative Industries, Calgary Economic Development. “WFW has been a strong supporter of our Creative Industries for over 30 years, servicing both foreign and local productions as we continue to grow and develop our sector. New production facilities enhance Alberta’s competitiveness in attracting foreign direct investment and increase the impact of the Film & Television sector on our provincial economy.”

“WFW has been a steadfast partner to Alberta’s film and television industry for over thirty years,” says Tom Cox, Managing Partner, SEVEN24 Films. “It is wonderful to see them deepen their commitment to this province once again through new infrastructure. This expansion can help fuel growth in our sector for decades to come.”

William F. White International Inc. Founded in 1963, William F. White International Inc. (WFW), a Sunbelt Rentals company, is Canada’s most iconic provider of production equipment to the entertainment industry. With offices across the country, the company services productions of all sizes from coast to coast and houses an extensive state-of-the-art inventory, including camera, lighting, grip, specialty equipment, location support and over 1.4 million square feet of production-ready studio properties.

We MAKE IT HAPPEN!  With a passionate team of 15,000 rental experts, a growing network of over 900 locations and an extensive equipment fleet that exceeds $10 billion, Sunbelt Rentals helps professionals and do-it-yourselfers get things done. With a highly diversified offering of equipment, solutions and services available, we assist customers throughout North America extend their capabilities, complete projects on-time and handle times of crisis. No matter if you are in commercial, industrial, residential, or municipal industries, we are constantly advancing the idea of what an equipment company can do for its customers. Visit sunbeltrentals.com to find out what we can do for you.