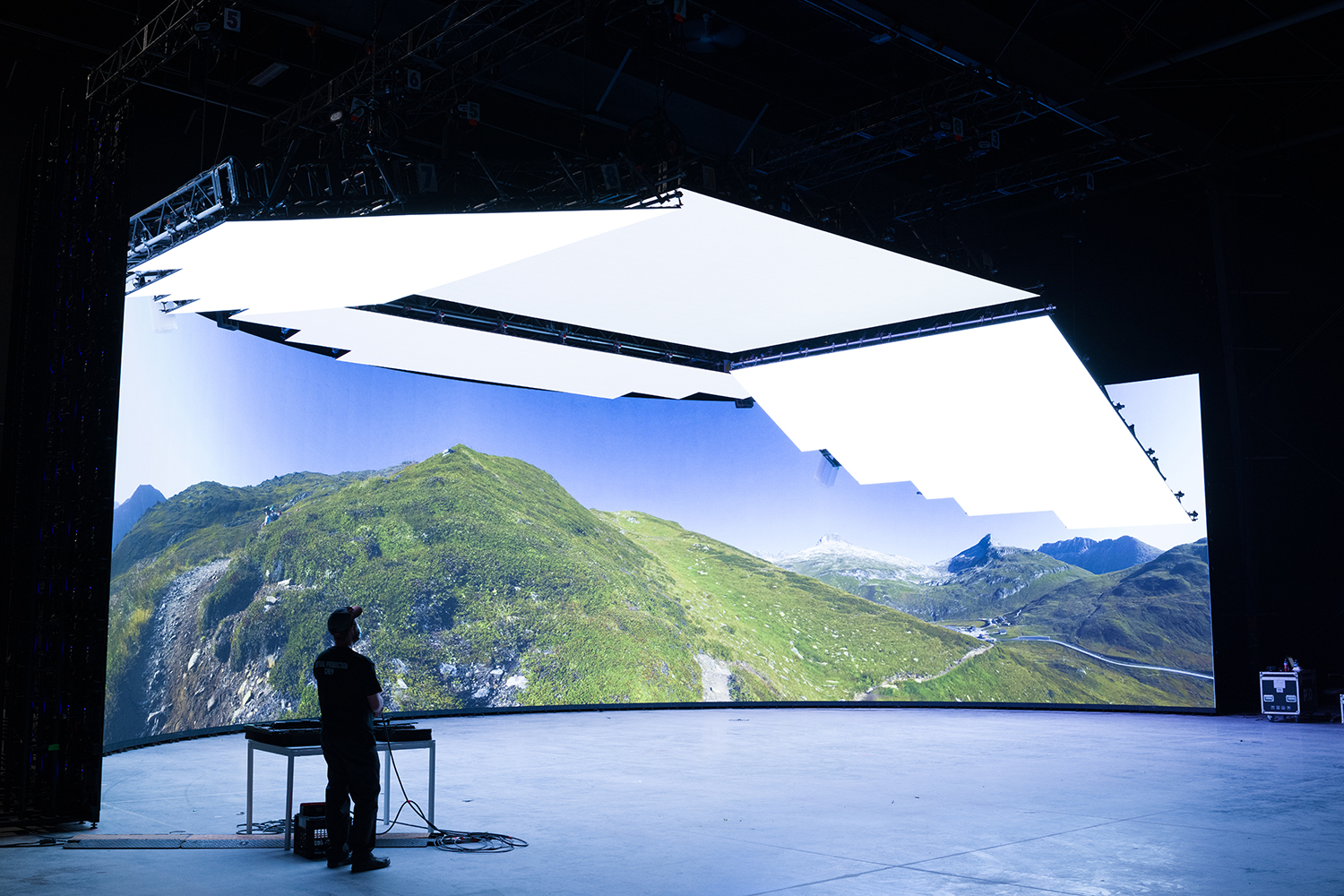 The new, state-of-the-art installation, known as Stage 6, is a 16,100 square foot stage with a large semi-circle LED volume that measures 62 feet across. Far more advanced than any other volume currently in use, Stage 6 is one of the only stages in the world equipped with a ceiling consisting of four dynamic modular sections, each with the ability to move and angle itself independently or as a single unit. This new feature has the advantage of giving Directors of Photography more flexibility when it comes to lighting.

Stage 6 is designed for shorter duration shoots including film and TV productions, as well as commercials that only require the space for a limited amount of time compared to the multi-month bookings associated with large scale, visual effects heavy TV and film projects. In addition to providing turnkey, cost-effective solutions to filmmakers, this new volume will create ample training opportunities for content creators wishing to enter this emerging space.

“We are dedicated to virtual production and see it as an integral part of the future of filmmaking,” says Garin Josey, Executive Vice President/Chief Operating Officer. “This new volume, located in the heart of Toronto, will continue to fuel growth in content creation and provide opportunities for productions of all sizes to utilize this emerging technology. By making this level of investment in virtual production, we are strategically positioning ourselves for the future, while clearly demonstrating our ongoing commitment to the industry through the creation of new jobs and opportunities in this space.”

“Stage 6 marks the completion of our second LED volume in Toronto, a city which PXO has had a close association with for many years,” says Jonny Slow, PXO CEO. “With this new installation, we will be able to provide virtual production facilities for the producers of a wider range of content and this will drive broader adoption of this cutting-edge production technique. Toronto is one of only a few places in the world where large scale LED volume facilities exist, and we are very proud to have been able to deliver this with Canadian talent and partners, as well as the support of all the government agencies who have helped make the city one of the biggest and most attractive physical production hubs in the world.”

Stage 6 is based at Studio City’s recently completed development in the Port Lands district of the city’s downtown core, a short distance away from PXO’s Toronto office at Revival Studios and Sunbelt Rentals, as well as WFW’s Toronto head office on Islington.

As with the first Toronto stage, this new volume will be operated by on-set PXO personnel for all productions, including those using the company’s 3D environment creation services. PXO and WFW have designed and built this volume in close collaboration with their technology partners Brompton Technology, Epic Games, Lenovo, NVIDIA, and ROE Visual.

“Through our newly minted partnership with PXO we have made great inroads in becoming a world leader in the virtual production space,” says Rick Perotto, Vice President of Business Development. “Where once a production would need to travel to multiple locations to shoot key scenes, this technology now allows them to shoot in Venice in the morning, and the Grand Canyon in the evening, all within the comfort of a soundstage. This evolution in technology increases creative control for clients while keeping the associated costs down and helping to reduce the carbon impact of traveling to far away destinations.”

“Our government is committed to the success of Ontario’s film and TV industry, with a focus on increasing production capacity and creating even more jobs in the creative industries as we emerge from the COVID-19 pandemic,” says Lisa MacLeod, Minister of Heritage, Sport, Tourism and Culture Industries. “Developments like this will showcase our cutting-edge innovation, attract world-class talent, and boost Ontario’s competitive status on the global stage. We will continue to work with industry leaders, such as William F. White and Pixomondo, to ensure producers at home and around the globe know that there’s no better place to create content than right here in Ontario.”

“Toronto’s film and tv sector has been thriving and growing over the past few years and that is thanks to partners like William F. White International Inc. and Pixomondo who are collaborating to bring new technology to our city,” says John Tory, Mayor of Toronto. “During my business mission to Los Angeles to help promote Toronto’s film and tv sector, we promised our client stakeholders that Toronto would be leaders in expanding new technology - today’s announcement is a demonstration of that commitment and innovation. We are excited that world leading technology companies like Pixomondo are choosing to locate their operations in Toronto and that partners like William F. White International are continuing to build up Toronto’s production infrastructure.”

”We are thrilled to welcome the second virtual production LED stage by William F. White and Pixomondo at Studio City in Toronto’s Port Lands,” says Paula Fletcher, Councillor, City of Toronto. “This partnership and multi-year commitment brings on a new era of technology integration in content creation in Toronto and further anchors the city as the greatest production centre in the world.”

“The expansion of virtual production stage space in Ontario is an important addition to our infrastructure and strengthens our value proposition to producers at home and abroad,” says Justin Cutler, Film Commissioner of Ontario at Ontario Creates. “William F. White and Pixomondo have combined their deep creative and technical knowhow to create innovative, leading-edge facilities that will provide storytellers with new opportunities, cost savings, and sustainable production environments.”

The opening of Stage 6 is part of PXO and WFW’s multi-year commitment to build virtual production studios across Canada. The next volume, slated for completion by September 2021 in Vancouver, will be one of the largest volumes in the world.

Virtual production, unlike traditional studios, allows filmmakers to utilize a combination of live action and cutting-edge digitally created environments rendered in real time on LED walls and ceilings (known as “volumes”) to deliver a production experience unlike any other. Until recently, traditional production methods involved shooting with a “greenscreen” and adding visual effects in postproduction or traveling to distant locations. With this new technology, clients are able keep costs down, increase creative control, reduce their carbon footprint, and provide an interactive experience for cast and crew (click here to watch a visual explanation: https://youtu.be/kdhsCV45zW0).

Founded in 1963, William F. White International Inc. (WFW), a Sunbelt Rentals company, is Canada’s most iconic provider of production equipment to the entertainment industry. With offices across the country, the company services productions of all sizes from coast to coast and houses an extensive state-of-the-art inventory, including camera, lighting, grip, power, specialty equipment, location support and over 1.4 million square feet of production-ready studio properties.

PXO is an award-winning visual effects studio with offices in North America and Europe. PXO won an Academy Award for its VFX work on Martin Scorsese’s Hugo and several Emmys for Game of Thrones. The company is Emmy nominated for its VFX work on Westworld, Star Trek: Discovery and The Orville. Recent and current PXO work includes Tom Clancy’s Without Remorse starring Michael B. Jordan, David Oyelowo’s family adventure film The Water Man, the action pic Greenland starring Gerard Butler and the next Roland Emmerich feature, Moonfall.

Head of Marketing and Communications